JEFF BENEDICT is one of the country’s top investigative reporters. He is a special features contributor for Sports Illustrated and the author of ten critically acclaimed books, including Pros and Cons and Out of Bounds.  His essays and articles have appeared in the New York Times, Newsweek, the Los Angeles Times among other publications, and have been the basis of segments on 60 Minutes, ABC’s 20/20, NBC’s Dateline, HBO’s Real Sports, and the Discovery Channel. He has a law degree and is a Distinguished Professor of Writing and Mass Media at Southern Virginia University. 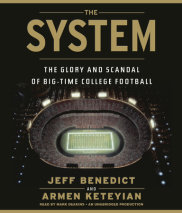 audio
The System
Author: Jeff Benedict and Armen Keteyian | Narrator: Mark Deakins
Release Date: September 17, 2013
AN EXPLOSIVE AND REVELATORY PORTRAIT REPORTED FROM DEEP BEHIND THE SCENES OF BIG-TIME NCAA COLLEGE FOOTBALL: THE PASSION, THE THRILLING ACTION—AND THE SHOCKING REALITIES THAT LIE BENEATH THIS COLOSSAL, MULTIBILLION-DOLLAR BUSINESS COLLEGE ...
ABOUT THIS AUDIOBOOK
$25
ISBN: 9780804148429
Unabridged Download 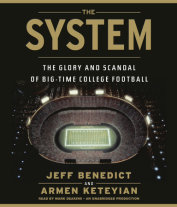