ART GARFUNKEL attended Columbia University, where he earned a master's degree in mathematics. He performed with Paul Simon as Simon & Garfunkel from 1963 to 1970. Garfunkel, with Paul Simon, has been the recipient of six Grammys, the Grammy Lifetime Achievement Award, and in 1990 was inducted into the Rock & Roll Hall of Fame. Garfunkel lives in New York with his wife and two children. He continues to travel around the world giving concert performances, and since 1973 has produced twelve solo albums. 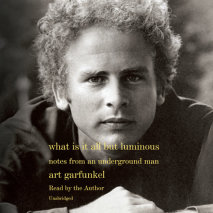 audio
What Is It All but Luminous
Author: Art Garfunkel | Narrator: Art Garfunkel
Release Date: September 26, 2017
"Poetic musings on a life well-lived—one that is still moving forward, always creating, always luminous. This isn't your typical autobiography. Garfunkel's history is told in flowing prose, bounding from present to past, far from a linear ...
ABOUT THIS AUDIOBOOK
$17.50
ISBN: 9780525499909
Unabridged Download 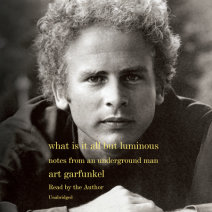