VOYAGERS series creator and architect Patrick Carman is a New York Times bestselling children’s author with millions of books in print in more than twenty languages across thirty titles. He is a leader in creative development, multi-platform storytelling, and world building. In 2011, he created a popular TED talk on the subject of reaching twenty-first-century readers and has overseen pioneering multimedia brands including SKELETON CREEK, TRACKERS, 3:15, and DARK EDEN. He was also one of the first authors chosen for 39 CLUES. Patrick’s books have been included on more than forty of the most prestigious state, national, and international awards lists. An enthusiastic reading advocate, he has visited more than 1,400 schools in the past decade. Visit him at patrickcarman.com. 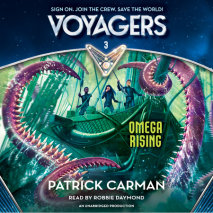 audio
Voyagers: Omega Rising (Book 3)
Author: Patrick Carman | Narrator: Robbie Daymond
Release Date: January 05, 2016
The action is on the page, on your device, and out of this world! This multiplatform series is part sci-fi, all action-adventure. And you don’t have long to wait—six books are coming all in one year!    Earth is in danger! The o...
ABOUT THIS AUDIOBOOK
$18
ISBN: 9781101916919
Unabridged Download 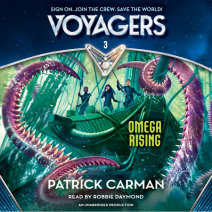