Mother Teresa (1910–1997) was born in Skopje (present-day Macedonia) and joined the Sisters of Loreto in Dublin in 1928. She left the Loreto order in 1948 to begin the Missionaries of Charity in Calcutta. Her service to the poorest of the poor became her life’s work. She was awarded the Nobel Peace Prize in 1979 and was beatified in 2003. 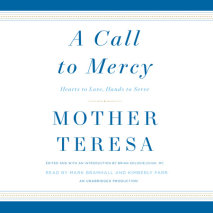 audio
A Call to Mercy
Author: Mother Teresa | Narrator: Kimberly Farr and Mark Bramhall
Release Date: August 16, 2016
Published to coincide with Pope Francis's Year of Mercy and the Vatican's canonization of Mother Teresa, this new book of unpublished material by a humble yet remarkable woman of faith whose influence is felt as deeply today as it was when she was al...
ABOUT THIS AUDIOBOOK
$20
ISBN: 9781524734367
Unabridged Download 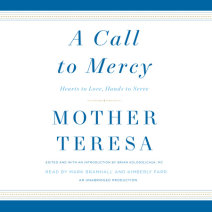 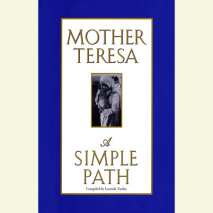 A Simple Path
Author: Mother Teresa | Narrator: Various
Release Date: September 25, 2007
Known around the globe for her indefatigable work on behalf of the poor, the sick, and the dying, Mother Teresa has devoted her life to giving hope to the hopeless in more than one hundred and twenty countries. She inspires us all to find a way to tr...
ABOUT THIS AUDIOBOOK
$9
ISBN: 9780739366752
Unabridged Download 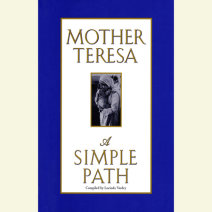 Meditations from A Simple Path
Author: Mother Teresa | Narrator: Ann Ross
Release Date: September 25, 2007
"Works of love are always works of joy.""Do we look at the poor with compassion? They are hungry not only for food, they are hungry to be recognized as human beings.""There is only one God and He is God to all; therefore it is important that everyone...
ABOUT THIS AUDIOBOOK
$5.99
ISBN: 9780739366769
Abridged Download