Samuel M. Katz is the author of more than twenty books and one hundred articles on Middle East security issues, terrorism, and police and military special operations. The founder of Special Operations Report, he has appeared as an expert on networks ranging from BBC World News to Fox News to Al Jazeera. Coauthor with Fred Burton of the New York Times bestseller Under Fire: The Untold Story of the Attack in Benghazi, he is also the author of The Ghost Warriors: Inside Israel's Undercover War Against Suicide Terrorism; Relentless Pursuit: The DSS and the Manhunt for the Al-Qaeda Terrorists; The Hunt for the Engineer: How Israeli Agents Tracked the Hamas Master Bomber; and many other books on the Arab-Israeli conflict and international counterterrorism. 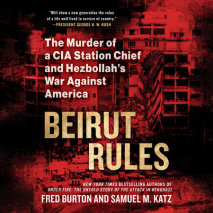 audio
Beirut Rules
Author: Fred Burton and Samuel Katz | Narrator: Rob Shapiro
Release Date: October 23, 2018
From the New York Times bestselling coauthors of Under Fire--the riveting story of the kidnapping and murder of CIA Station Chief William Buckley.After a deadly terrorist bombing at the American embassy in Lebanon in 1983, only one man inside the CIA...
ABOUT THIS AUDIOBOOK
$20
ISBN: 9780525641308
Unabridged Download 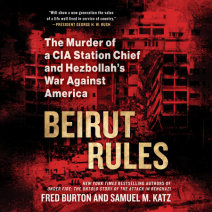