Dana Schwartz is a writer whose work has appeared in the New Yorker, Mental Floss, the Guardian, the New York Observer, MTV News, and VICE. When she's not on Twitter as one of her parody accounts (@GuyInYourMFA and @DystopianYA), she's on Twitter as herself (@DanaSchwartzzz), sharing far too much personal information to ever pull off the Thomas-Pynchon-reclusive-author thing. She currently lives in New York City. 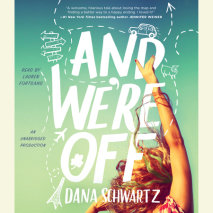 audio
And We're Off
Author: Dana Schwartz | Narrator: Lauren Fortgang
Release Date: May 02, 2017
A Seventeen Magazine Best Book of the Year “A winsome, hilarious tale about losing the map and finding a better way to a happy ending. I loved it!” —#1 New York Times bestselling author Jennifer Weiner Seventeen-...
ABOUT THIS AUDIOBOOK
$23
ISBN: 9781524777906
Unabridged Download 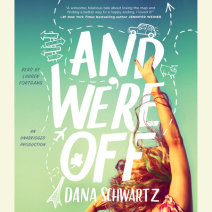