Ger Duany is a survivor of the tragic exodus of an estimated 20,000 Sudanese children, the "Lost boys of Sudan," and has been appointed as UN Goodwill Ambassador. Born in the town of Akobo, Ger was caught up in Sudan's north-south civil war and was forcefully recruited as a child soldier. At the age of 14, he managed to escape to neighbouring Ethiopia and was eventually resettled to the United States from the Dadaab refugee camp in Kenya. In 2014, UNHCR helped Ger reunite with his mother and other family members in Kenya's Kakuma refugee camp. He is also a model and actor. To learn more about Ger, his inspiring life story, and his constant work to help refugees around the world, visit GerDuany.com or @GerDuany on Twitter. 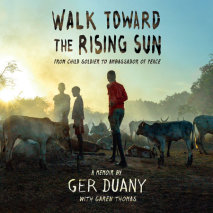 audio
Walk Toward the Rising Sun
Author: Ger Duany and Garen Thomas | Narrator: Ger Duany
Release Date: September 22, 2020
The amazing autobiography of a young Sudanese boy who went from a child soldier and struggling refugee to international peace activist and Hollywood actor. Sudan, 1980s: Ger Duany knew what he wanted out of life--make his family proud, play with his ...
ABOUT THIS AUDIOBOOK
$20
ISBN: 9780593216729
Unabridged Download 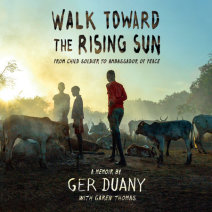