home
x
Subscribe
Warsan Shire
Poet and activist Warsan Shire grew up in London. She is the author of the collections Teaching My Mother How to Give Birth (flipped eye, 2011), Her Blue Body (flipped eye, 2015), and Our Men Do Not Belong to Us (Slapering Hol Press and Poetry Foundation, 2015). Her poems have appeared in journals and magazines, including Poetry Review, Wasafiri, and Sable LitMag; in the anthologies Salt Book of Younger Poets (2011), Long Journeys: African Migrants on the Road (2013), and Poems That Make Grown Women Cry (2016); as well as in Beyoncé’s visual album Lemonade (2016).

Shire is poetry editor of Spook Magazine and guest edited Young Sable LitMag. Shire has read her work in South Africa, Italy, Germany, and the United States. In 2013, she won Brunel University’s first African Poetry Prize. In 2014, she was named the first Young Poet Laureate for London and chosen as poet-in-residence for Queensland, Australia.
Read More +
2 results   page 1 of 1   view sort by 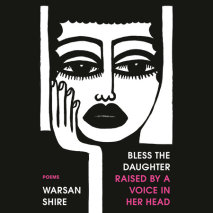 Bless the Daughter Raised by a Voice in Her Head
Author: Warsan Shire | Narrator: Warsan Shire
Release Date: March 01, 2022
Poems of migration, womanhood, trauma, and resilience from the celebrated collaborator on Beyoncé’s Lemonade and Black Is King, award-winning Somali British poet Warsan Shire Mama, I made it / out of your home / alive, raised by / t...
ABOUT THIS AUDIOBOOK
$10
ISBN: 9780593412343
Unabridged Download 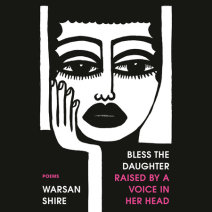