Harry S. Dent, Jr., is the bestselling author of The Demographic Cliff, The Great Depression Ahead, and many other books. He is the founder of Dent Research, which publishes the newsletters Economy & Markets, Boom & Bust, and The Leading Edge, among many others. He has an MBA from Harvard, was a consultant for several Fortune 100 companies while at Bain & Company, and lectures widely. He lives in San Juan, Puerto Rico. 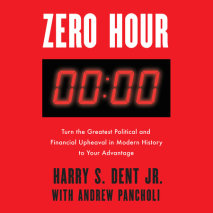 audio
Zero Hour
Author: Harry S. Dent, Jr. and Andrew Pancholi | Narrator: John Lee and Jonathan Todd Ross
Release Date: November 14, 2017
Harry S. Dent Jr., bestselling author of The Demographic Cliff and The Sale of a Lifetime, predicted the populist wave that has driven the Brexit vote, the election of Donald Trump, and other recent shocks around the world. Now he returns with the de...
ABOUT THIS AUDIOBOOK
$20
ISBN: 9780525633174
Unabridged Download 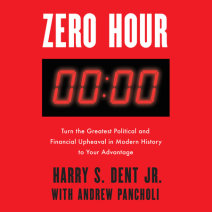