Robert Iger is the CEO of The Walt Disney Company and directs the company’s creative endeavors. He served as CEO from 2005 to 2020 and as executive chairman from 2020 to 2022. He previously was president and COO from 2000 to 2005. Iger began his career at ABC in 1974, and as chairman of the ABC Group he oversaw the broadcast television network and station group, managed the cable television properties, and guided the merger between Capital Cities/ABC, Inc., and The Walt Disney Company. Iger officially joined the Disney senior management team in 1996 as chairman of the Disney-owned ABC Group and in 1999 was given the additional responsibility of president, Walt Disney International. In that role, Iger expanded Disney’s presence outside of the United States, establishing the blueprint for the company’s international growth today. 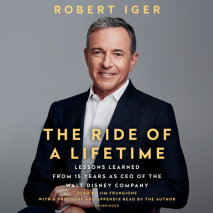 audio
The Ride of a Lifetime
Author: Robert Iger | Narrator: Jim Frangione and Robert Iger
Release Date: September 23, 2019
#1 NEW YORK TIMES BESTSELLER • A memoir of leadership and success: The CEO of Disney, Time’s 2019 businessperson of the year, shares the ideas and values he embraced while reinventing one of the world’s most beloved companies an...
ABOUT THIS AUDIOBOOK
$20
ISBN: 9780525499336
Unabridged Download 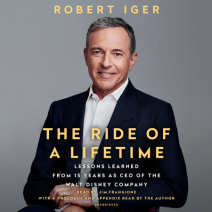