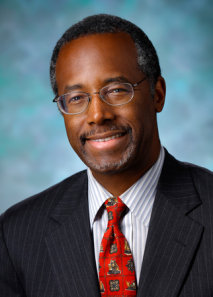 Ben Carson, MD, was raised by a poor single mother in Detroit and is the former director of pediatric neurosurgery at Johns Hopkins Hospital. Now a Washington Times columnist and a FOX News contributor, he is the author of numerous books, including the New York Times bestsellers Gifted Hands and America the Beautiful. A former member of the President’s Council on Bioethics, Dr. Carson is the recipient of the Presidential Medal of Freedom, the highest civilian honor in the country. He has three grown children and two grandchildren and now lives in West Palm Beach, Florida. 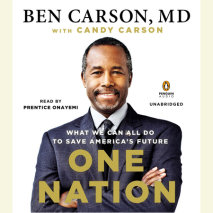 One Nation
Author: Candy Carson and Ben Carson, MD | Narrator: Prentice Onayemi
Release Date: May 20, 2014
Dear Reader, In February 2013 I gave a speech at the National Prayer Breakfast. Standing a few feet from President Obama, I warned my fellow citizens of the dangers facing our country and called for a return to the princ...
ABOUT THIS AUDIOBOOK
$15
ISBN: 9780698162341
Unabridged Download 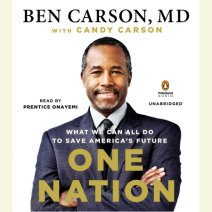