M. A. BENNETT is half-Venetian, and was born in Manchester, England, and raised in the Yorkshire Dales. She is a history graduate of Oxford University and the University of Venice, where she specialized in the study of Shakespeare's plays as a historical source. After university she studied art and has since worked as an illustrator, actress and film reviewer. She also designed tour visuals for rock bands, including U2 and the Rolling Stones. She was married on the Grand Canal in Venice and lives in north London with her husband, son and daughter. Follow her at @MABennettAuthor on Twitter and at m.a.bennettauthor on Instagram. 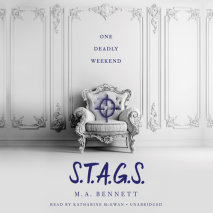 audio
S.T.A.G.S.
Author: M. A. Bennett | Narrator: Katharine Lee McEwan
Release Date: January 30, 2018
"Gossip Girl meets The Hunger Games." --Bustle"Like Mean Girls, but British and deadly. . . . This book is great, from start to finish." --Hypable Get ready for one deadly weekend in this twisting thriller for fans of Pretty ...
ABOUT THIS AUDIOBOOK
$23
ISBN: 9780525589860
Unabridged Download 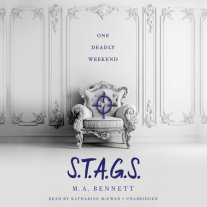