home
x
Subscribe
Kate Hannigan
Kate Hannigan is the author of numerous children's books, including the middle-grade series The League of Secret Heroes, as well as the middle-grade novel The Detective's Assistant, which won the Golden Kite Award for best middle-grade fiction. Her debut picture book, A Lady Has the Floor: Belva Lockwood Speaks Out for Women's Rights, received four starred reviews, and was praised as "excellent" by Kirkus Reviews. Her other titles include a graphic novel, History Comics: The Great Chicago Fire, as well as the chapter book series Cupcake Cousins. Kate lives with her family in Chicago.

Zachariah OHora is the prolific illustrator of the New York Times bestseller Wolfie the Bunny, which received four starred reviews and was praised by the Chicago Tribune as "pitch-perfect." He is also the author-illustrator of Stop Snoring Bernard!, which won the 2011 Society of Illustrators Founders Award and was the 2012 State of PA Dept of Ed One book, as well as Not Fits Nilson!, which received the PALA Carolyn W. Field Award, and was named the Huffington Post Best Children's Book of the Year, as well as a Kirkus Best Picture Book of the Year and a New York Public Library Book for Reading and Sharing. Zachariah's other titles include My Cousin Momo!, The Teacher's Pet, The Not So Quiet Library, and Niblet & Ralph. He lives in Narberth, PA, with his family.
Read More +
1 results   page 1 of 1   view sort by 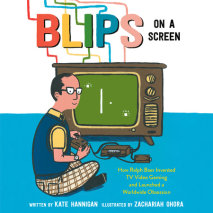 Blips on a Screen
Author: Kate Hannigan |
Release Date: April 19, 2022
An engaging picture book biography based on the incredible true story of a Jewish refugee who pioneered home video games and launched a worldwide obsession. Do you ever wonder how video gaming was invented? What came before your PlayStation or X...
ABOUT THIS AUDIOBOOK
$5
ISBN: 9780593509302
Unabridged Download 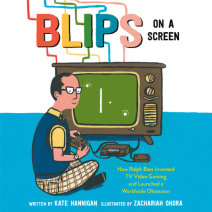