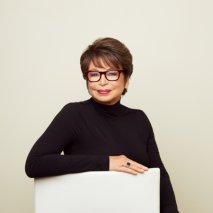 Valerie Jarrett was the longest serving senior adviser to President Barack Obama. She oversaw the Offices of Public Engagement and Intergovernmental Affairs and chaired the White House Council on Women and Girls. Before joining the White House, she served as the chief executive officer of The Habitat Company in Chicago, chairman of the Chicago Transit Board, commissioner of Planning and Development, and deputy chief of staff for Chicago mayor Richard M. Daley. Jarrett has received numerous awards and honorary degrees, including Time's "100 Most Influential People." She received her B.A. from Stanford University in 1978 and her J.D. from the University of Michigan Law School in 1981. She is currently a senior adviser to the Obama Foundation and Attn and a senior distinguished fellow at the University of Chicago Law School. 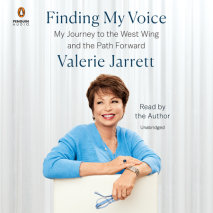 audio
Finding My Voice
Author: Valerie Jarrett | Narrator: Valerie Jarrett
Release Date: April 02, 2019
A NEW YORK TIMES BESTSELLERFinalist for the NAACP Image Award for "Outstanding Literary Work""Valerie has been one of Barack and my closest confidantes for decades... the world would feel a lot better if there were more people like Valerie blazing th...
ABOUT THIS AUDIOBOOK
$20
ISBN: 9780525624288
Unabridged Download 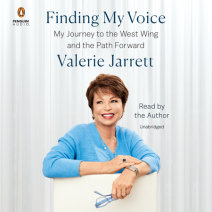