Daniel Chidiac is a writer from Melbourne, Australia. He went on a journey of self-discovery after becoming awakened to his power over his own life and developed this program to share with others what he discovered inside himself. Who Says You Can't? You Do was first published in 2012 and became an Amazon bestseller in eight different countries. His writing has now reached millions of people around the world. He has a following of hundreds of thousands on Instagram. Find him online at danielchidiac.com and Instagram.com/whosaysyoucantyoudo. 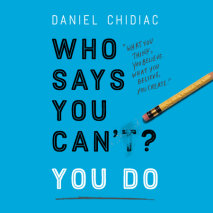 audio
Who Says You Can't? You Do
Author: Daniel Chidiac | Narrator: Robbie Daymond
Release Date: January 09, 2018
A word-of-mouth phenomenon that's changing lives around the world--a journey into your true self and amazing potential.Do you want to change your life? Well, who says you can't? A moment came in Daniel Chidiac's life when he realized he wasn't l...
ABOUT THIS AUDIOBOOK
$20
ISBN: 9780525636618
Unabridged Download 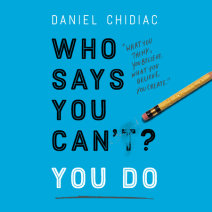