In addition to A Burning in My Bones, Winn Collier has authored four books (Restless Faith, Let God: The Transforming Wisdom of François Fénelon, Holy Curiosity, and Love Big, Be Well) and contributed to numerous other volumes. He has written for multiple periodicals including Christianity Today, Christian Century, Relevant, and the Washington Post.

A pastor for twenty-five years, Winn was the founding pastor of All Souls Charlottesville in Virginia. He now directs the Eugene Peterson Center for Christian Imagination at Western Theological Seminary in Michigan. He holds a PhD from the University of Virginia, where he focused on the intersection of religion and literary fiction. Winn and his wife, Miska, a spiritual director, live in Holland, Michigan, with their two sons. 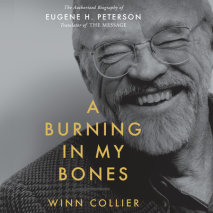 audio
A Burning in My Bones
Author: Winn Collier | Narrator: Richard Poe
Release Date: March 23, 2021
This essential authorized biography of Eugene Peterson offers unique insights into the experiences and spiritual convictions of the iconic American pastor and beloved translator of The Message. “In the time of a generation-wide breakdown in tru...
ABOUT THIS AUDIOBOOK
$20
ISBN: 9780593287514
Unabridged Download 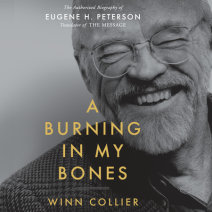