Steven C. Hayes, Ph.D., is a professor of psychology at the University of Nevada, Reno. The author of forty-three books and more than six hundred scientific articles, he has served as president of the Association for Behavioral and Cognitive Therapy and the Association for Contextual Behavioral Science, and is one of the most cited psychologists in the world. Dr. Hayes initiated the development of Acceptance and Commitment Therapy (ACT) and of Relational Frame Theory (RFT), the approach to cognition on which ACT is based. His research has been cited widely by major media, including: Time magazine, The New Yorker, The New York Times, Men's Health, Self, The Wall Street Journal, Psychology Today, O, The Oprah Magazine, and Salon.com. 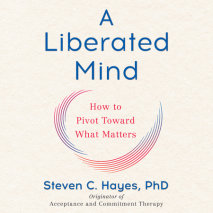 audio
A Liberated Mind
Author: Steven C. Hayes, PhD | Narrator: Mark Deakins and Steven C. Hayes, PhD
Release Date: August 27, 2019
"In all my years studying personal growth, Acceptance and Commitment Therapy is one of the most useful tools I've ever come across, and in this book, Dr. Hayes describes it with more depth and clarity than ever before."-Mark Manson, #1 New York Times...
ABOUT THIS AUDIOBOOK
$22.50
ISBN: 9780525640738
Unabridged Download 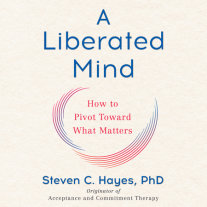