Craig Canapari, M.D., is Director of the Yale Pediatric Sleep Center and an attending physician in Pediatric Pulmonology at Yale-New Haven Hospital. He served previously as Director of the Pediatric Sleep Center at Massachusetts General Hospital in Boston. He graduated from Yale with a degree in English, and attended medical school at the University of Connecticut. Canapari’s work has been published in numerous academic journals as well as publications including the New York Times, the Wall Street Journal, the Washington Post, US News and World Report, and the Boston Globe. He lives outside New Haven with his wife and two sons. 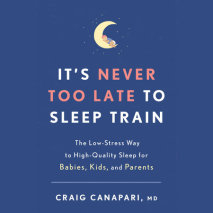 audio
It's Never Too Late to Sleep Train
Author: Craig Canapari, MD | Narrator: Sean Runnette
Release Date: May 07, 2019
From a leading pediatric sleep physician comes a revolutionary program that will have everyone in the house sleeping through the night.When Dr. Craig Canapari became a father, he realized that all his years of 36-hour hospital shifts didn't even come...
ABOUT THIS AUDIOBOOK
$15
ISBN: 9781984840615
Unabridged Download 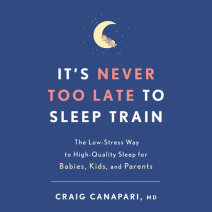