She grew up in Concord, New Hampshire, where she discovered Harry Potter and subsequently fell in love with the many worlds of science fiction and fantasy. In college, Meredith began writing her first novel, which is now in a drawer somewhere where it belongs. Pursuing her love of travel, Meredith spent a semester in London and then backpacked in Europe for a month before earning her master's degree in social work from the University of New Hampshire. After graduation, Meredith worked in the field in Boston for a few years before deciding to pursue her true dream of telling stories. Meredith and her husband recently moved to Texas after living in Zurich, Switzerland for a few years. Meredith spends her days eating cheese and chocolate by the lake, and writing stories about characters way braver than she is.
Read More +
1 results   page 1 of 1   view sort by 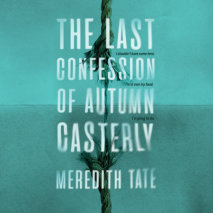 audio
The Last Confession of Autumn Casterly
Author: Meredith Tate | Narrator: Emma Galvin and Phoebe Strole
Release Date: February 11, 2020
If I Stay meets One of Us is Lying in this gripping contemporary thriller.When band-geek Ivy and her friends get together, things start with a rousing board game and end with arguments about Star Wars. Her older sister Autumn is a different story. En...
ABOUT THIS AUDIOBOOK
$25
ISBN: 9780593162781
Unabridged Download 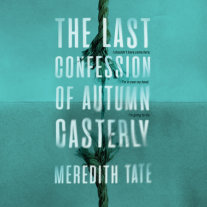