Reed Hastings is an entrepreneur who has revolutionized entertainment since co-founding Netflix in 1997, serving as its chairman and CEO since 1999. His first company, Pure Software, was launched in 1991 and acquired just before Netflix was launched.  Reed served on the California State Board of Education from 2000 to 2004 and is an active educational philanthropist. He has sat on the board of several educational organizations including Dreambox Learning, KIPP and Pahara. He received a BA from Bowdoin College in 1983 and an MSCS in artificial intelligence from Stanford University in 1988. Between Bowdoin and Stanford, Reed served in the Peace Corps as a volunteer teacher in Southern Africa. 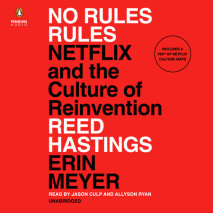 audio
No Rules Rules
Author: Reed Hastings and Erin Meyer | Narrator: Jason Culp and Allyson Ryan
Release Date: September 08, 2020
Netflix cofounder Reed Hastings reveals for the first time the unorthodox culture behind one of the world's most innovative, imaginative, and successful companiesThere has never before been a company like Netflix. It has led nothing short of a revolu...
ABOUT THIS AUDIOBOOK
$20
ISBN: 9781984891174
8 Unabridged CDsUnabridged Download 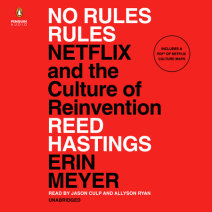