Edward-Isaac Dovere is a staff writer for The Atlantic and its lead political correspondent. He has covered Democratic politics for fifteen years—beginning in his native New York City, on to the Obama White House, and then across twenty-nine states during the 2020 election cycle. His reporting has won the White House Correspondents Association’s Merriman Smith Award for excellence and the Society of Professional Journalists’ Daniel Pearl Award for investigative reporting, among other awards. He lives in Washington, DC, with his family. 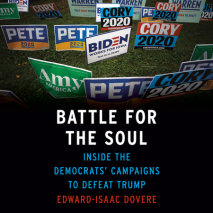 audio
Battle for the Soul
Author: Edward-Isaac Dovere | Narrator: Holter Graham
Release Date: May 25, 2021
An award-winning political journalist for The Atlantic tells the inside story of how the embattled Democratic Party, seeking a direction for its future during the Trump years, successfully regained the White House.The 2020 presidential campaign was a...
ABOUT THIS AUDIOBOOK
$27.50
ISBN: 9780593394786
Unabridged Download 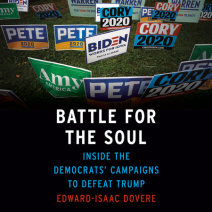