home
x
Subscribe
Ria Thundercloud
Ria Thundercloud is from the Ho-Chunk Nation and Sandia Pueblo. She holds strong ties to her kinship in the Southwest and North, practicing both styles of traditional dance. She started training in classical dance at the age of thirteen, went professional at sixteen, and has traveled internationally as a cultural ambassador and professional dancer. Ria is a 2019 graduate from the Institute of American Indian Arts in Indigenous Liberal Studies and is a holistic yoga teacher from the Healing Lotus Center. Her art is influenced by the women who came before her, reclaiming stories of matriarchs that highlight the resilience and knowledge of Indigenous women.

Kalila J. Fuller was born and raised in Portland, Oregon, where she continues to draw inspiration from her childhood amongst the fir trees. She graduated from the Pacific Northwest College of Art with a degree in illustration. She loves dogs, watching cartoons, and drinking chai lattes.
Read More +
1 results   page 1 of 1   view sort by 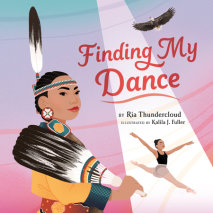 Finding My Dance
Author: Ria Thundercloud |
Release Date: September 13, 2022
In her debut picture book, professional Indigenous dancer Ria Thundercloud tells the true story of her path to dance and how it helped her take pride in her Native American heritage.At four years old, Ria Thundercloud was brought into the powwow circ...
ABOUT THIS AUDIOBOOK
$5
ISBN: 9780593610831
Unabridged Download 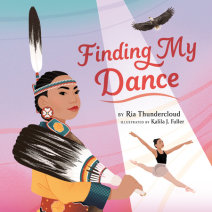