home
x
Subscribe
Anne Renaud
Anne Renaud is the author of fifteen children's books, including Mr. Crum's Potato Predicament, which was a Bank Street Best Book and an Ontario Library Association best book. Her nonfiction titles include The Extraordinary Life of Anna Swan (nominated for the Quebec Writers Federation Prize for Children, the Silver Birch Award, and the Rocky Mountain Book Award) and Fania's Heart (winner of the Canadian Jewish Literary Award). Her poems, articles, tales, and craft projects appear regularly in children's magazines. She lives in Westmount, Quebec, Canada.

Rashin Kheiriyeh is an award-winning illustrator, author, animator, and painter who has published over eighty children's books in more than a dozen countries. She has received fifty national and international awards, including the Sendak Fellowship Award, the Bologna Book Fair New Horizon Award, the Golden Apple Award (Slovakia), and the FAJR Film Festival's Crystal Roc Award (Iran). She has a Doctorate in illustration and a BFA and an MFA in graphic design. She's the artist for Sugarland (Shekarestan), the most popular animated TV series in Iran, and is also a lecturer in the art department of the University of Maryland. Some of her clients include the New York Times, Google, Kennedy Center, and Stanford University. She was born in Iran, and now lives in Washington DC.
Read More +
1 results   page 1 of 1   view sort by 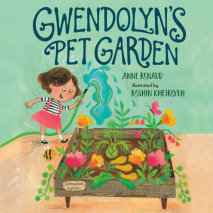 Gwendolyn's Pet Garden
Author: Anne Renaud
Release Date: May 04, 2021
A unique solution is found when a little girl dreams of getting a pet.Gwendolyn longs for a pet. What kind? Any kind! How many legs? Two, four, ten--she's not picky! But her parents have other ideas, and instead they give her . . . a box of dirt. "It...
ABOUT THIS AUDIOBOOK
$5
ISBN: 9780593398913
Unabridged Download 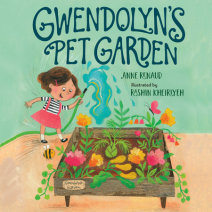