Ann Braden (annbradenbooks.com) writes books about kids trying to stand up for themselves even when things are tough. Her debut middle grade novel, The Benefits of Being an Octopus, was named one of NPR’s Best Books of 2018 and has appeared on numerous state lists. Ann founded the Local Love Brigade, which sends love postcards to those who are facing hate. She also founded GunSenseVT, a grassroots group that helped pass landmark gun violence prevention legislation. Ann has been a middle school teacher, the co-host of the children’s book podcast Lifelines: Books That Bridge the Divide, and co-organizer of #KidsNeedMentors. Ann lives in southern Vermont with her husband, two children, and two insatiable cats. 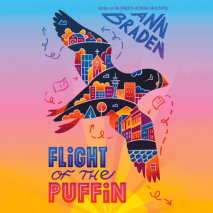 audio
Flight of the Puffin
Author: Ann Braden | Narrator: Maxwell Glick, Michael Crouch, Katie Schorr and Dani Martineck
Release Date: May 04, 2021
One small act of kindness ripples out to connect four kids in this stirring novel by the author of the beloved The Benefits of Being an Octopus.Libby comes from a long line of bullies. She wants to be different, but sometimes that doesn’t work ...
ABOUT THIS AUDIOBOOK
$15
ISBN: 9780593411261
Unabridged Download 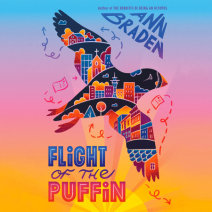