Lincoln Peirce is a New York Times bestselling author and cartoonist. His comic strip Big Nate appears in over 400 newspapers worldwide and online at gocomics.com/bignate. In 2010, Lincoln introduced the self-styled “king of detention” to a new generation of young readers as a series of illustrated novels. In the past ten years, over twenty million Big Nate books have been sold, and Nickelodeon has created an animated series based on the character.

Max and the Midknights and Battle of the Bodkins, Lincoln’s instant New York Times bestselling novels for Crown Books for Young Readers, originated as a spoof of sword and sorcery tales. The Tower of Time reunites Max and her friends for a rollicking time-travel saga.

Lincoln and his wife, Jessica, have two children and live in Portland, Maine. 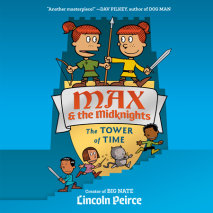 Max and the Midknights: The Tower of Time
Author: Lincoln C. Peirce |
Release Date: March 01, 2022
From the creator of the Big Nate series comes the third Max and the Midknights adventure!  "Fantastic! I loved it!" --Dav Pikley, New York Times bestselling author of the Dog Man seriesEveryone's favorite knight-in-training is back...to back! Ma...
ABOUT THIS AUDIOBOOK
$20
ISBN: 9780593505601
Unabridged Download 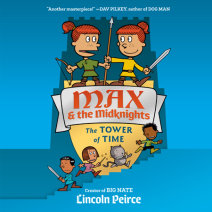