Brad Smith is Microsoft's president, where he leads a team of more than 1,400 business, legal and corporate affairs professionals working in 56 countries. He plays a key role in spearheading the company's work on critical issues involving the intersection of technology and society, including cybersecurity, privacy, artificial intelligence, human rights, immigration, philanthropy and environmental sustainability. The Australian Financial Review has described Smith as "one of the technology industry's most respected figures," and the New York Times has called him "a de facto ambassador for the technology industry at large." 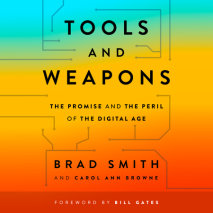 audio
Tools and Weapons
Author: Carol Ann Browne and Brad Smith | Narrator: Carol Ann Browne and Brad Smith
Release Date: September 10, 2019
The instant New York Times bestseller.From Microsoft's president and one of the tech industry's broadest thinkers, a frank and thoughtful reckoning with how to balance enormous promise and existential risk as the digitization of everything accelerate...
ABOUT THIS AUDIOBOOK
$22.50
ISBN: 9780593107522
Unabridged Download 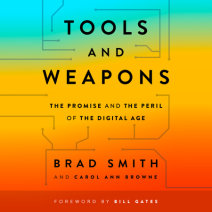