Peggy Noonan was a special assistant to President Ronald Reagan from 1984 to 1986; in 1988, she was chief speechwriter to Vice President George Bush during his campaign for the presidency. In 1989, she left Washington, DC, for her native New York, where she completed her first book, the bestselling What I Saw at the Revolution: A Political Life in the Reagan Years. Since that time, her articles, and essays have appeared in Time, Newsweek, the New York Times, the Washington Post, Forbes, and many other publications. She is also author of The Case Against Hillary Clinton, a #1 New York Times bestseller. Currently, she is a columnist and contributing editor at the Wall Street Journal and a political contributor for Fox News. She lives in New York City. 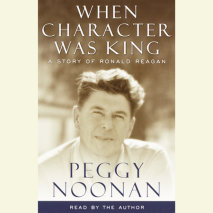 When Character Was King
Author: Peggy Noonan | Narrator: Peggy Noonan
Release Date: November 13, 2001
From the bestselling author of What I Saw at the Revolution comes an elegiac tribute to one of America's most beloved leaders.It is twenty years—a full generation—since Ronald Reagan first walked into the White House and ignited a revolut...
ABOUT THIS AUDIOBOOK
$12.50
ISBN: 9780553755091
Abridged Download 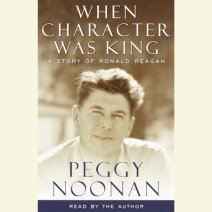