Morgan Levine is an assistant professor of pathology at Yale University School of Medicine. Her research focuses on the science of biological aging, specifically using bioinformatics to quantify the aging process and test how lifestyle and pharmaceutical interventions alter the rate of aging. As a leading voice in the field of aging and longevity science, she has been featured in media outlets such as CNN, The Guardian, Time, Newsweek, The Huffington Post, the BBC, and many more. She also appeared in the DocuSeries by Netflix and Goop, alongside Gwyneth Paltrow, which was released in early 2020. 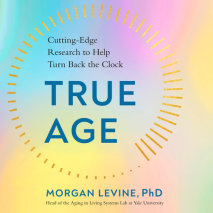 audio
True Age
Author: Morgan Levine, PhD | Narrator: Sarah Beth Pfeifer
Release Date: May 03, 2022
Cutting-edge research shows how to determine and decrease your true biological age.What if there was a way to measure our biological age? And what if there were strategies to slow down—or even reverse—the aging process? The answers to the...
ABOUT THIS AUDIOBOOK
$22.50
ISBN: 9780593507438
Unabridged Download 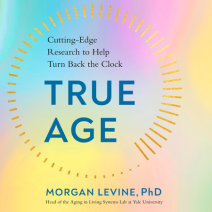