Elizabeth Akers is an economist and senior fellow at the Manhattan Institute, where she focuses on labor and higher education. Her writing and research have been featured in The New York Times, USA Today, The Wall Street Journal, The Washington Post, Bloomberg, Quartz, Newsweek, Politico, Slate, and The Hill. She has appeared on NPR's Marketplace, CNBC, ABC News, BBC's Newshour, Bloomberg TV, C-SPAN, and Cheddar, among other TV and radio networks. 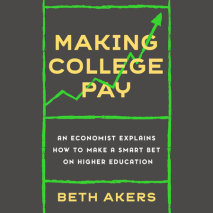 Making College Pay
Author: Elizabeth Akers
Release Date: May 18, 2021
A leading economist explains why college is still a smart investment: as long as you make the right choices about where to go, what to study, and how to pay for it.The cost of college makes for frightening headlines and politics. The outstanding bala...
ABOUT THIS AUDIOBOOK
$17.50
ISBN: 9780593400036
Unabridged Download 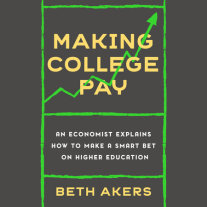