Eric Adjepong (he/him) is the host of a series of live, virtual cooking classes that explore West African cuisine and food of the African diaspora. Adjepong rose to prominence as a finalist on season 16 of Bravo's Top Chef and as a contestant on season 17 of Top Chef All-Stars. As a first-generation Ghanaian American born and raised in New York City, Adjepong sources the flavors and influences in his cooking from many of the West African dishes he grew up eating.

Lala Watkins (she/her) is an illustrator, author, and self-proclaimed “good vibes connoisseur.” A graduate of the Ringling College of Art & Design, Watkins has worked on numerous children’s books and comics. 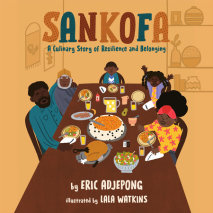 Sankofa
Author: Eric Adjepong |
Release Date: October 03, 2023
Inspired by acclaimed chef Eric Adjepong’s own childhood, Sankofa is the powerful story of a young boy’s culinary journey 400 years into the past to reconnect with his African roots and find his own place in America.What if home was a pla...
ABOUT THIS AUDIOBOOK
$5
ISBN: 9780593745045
Unabridged Download 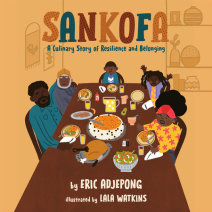