home
x
Subscribe
Muzoon Almellehan
MUZOON ALMELLEHAN is an internationally recognized activist for education, refugees, and the rights of girls and women. She is a UNICEF Goodwill Ambassador, the first with official refugee status. She was named one of Glamour magazine's Women of the Year and one of Teen Vogue's 21 Under 21.

Muzoon has spoken in front of the United Nations General Assembly and at the G20 Summit in Germany, among several other distinguished audiences, and presented a TEDxTeen Talk called "The Future of Syria Depends on One Thing." Angela Merkel, Bill Clinton, and Malala Yousafzai are among the supporters of Muzoon and her important work.

Muzoon now lives in Newcastle, England, with her family, and is a graduate of Newcastle University.

WENDY PEARLMAN is a professor of political science at Northwestern University who has written four books. Wendy’s book We Crossed a Bridge and It Trembled: Voices from Syria is a collection of firsthand testimonials that chronicle the Syrian revolution, war, and refugee crisis exclusively through the stories of people who have lived them.
Read More +
1 results   page 1 of 1   view sort by 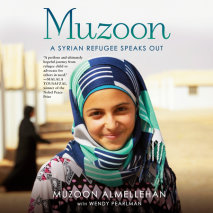 Muzoon
Author: Muzoon Almellehan |
Release Date: March 21, 2023
“Muzoon takes readers on her perilous and ultimately hopeful journey from refugee child to advocate for others in need.”—Malala Yousafzai, bestselling author and winner of the Nobel Peace PrizeWhen her family had to flee Syria, 14-y...
ABOUT THIS AUDIOBOOK
$18
ISBN: 9780593505588
Unabridged Download 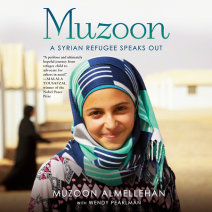