James Allen was born in Leicester, England, in 1864. He took his first job at age 15 to support his family after his father was murdered while looking for work in America. Allen was employed as a factory knitter and a private secretary until the early twentieth century, when he became known for his motivational writing. His 1903 work As a Man Thinketh earned him worldwide fame as a prophet of inspirational thinking and influenced a who's who of self-help writers, including Napoleon Hill, Dale Carnegie, and Norman Vincent Peale. Allen died at age 47 in 1912. 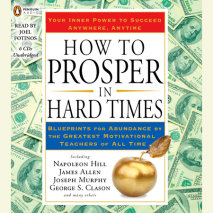 How to Prosper in Hard Times
Author: Napoleon Hill and James Allen | Narrator: Joel Fotinos
Release Date: March 05, 2009
The tried-and-true prosperity wisdom of these beloved writers, teachers, and thinkers has been relied upon by generations of Americans seeking guidance in hard economic timesâ€” and now, for the first time, it is collected in a singl...
ABOUT THIS AUDIOBOOK
$17.50
ISBN: 9781101029596
Unabridged Download 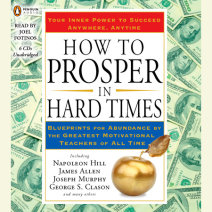