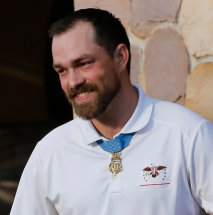 Former Staff Sergeant Clinton L. Romesha enlisted in the Army in 1999. He deployed twice to Iraq in support of Operation Iraqi Freedom, and once to Afghanistan in support of Operation Enduring Freedom. At the time of the deadly attack on Combat Outpost (COP) Keating on October 3, 2009, Staff Sergeant Romesha was assigned as a section leader for Bravo Troop, 3-61st Cavalry, 4th Brigade Combat Team, 4th Infantry Division. He is the recipient of numerous awards and decorations, including the Medal of Honor, which has been received by only twelve others for the heroism they displayed while serving in Iraq or Afghanistan. Romesha separated from the Army in 2011. He lives with his family in North Dakota. 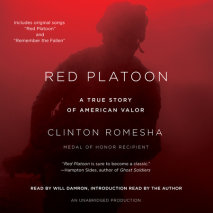 audio
Red Platoon
Author: Clinton Romesha | Narrator: Clinton Romesha and Will Damron
Release Date: May 03, 2016
The only comprehensive, firsthand account of the thirteen hour firefight at the Battle of Keating by Medal of Honor recipient Clinton Romesha, for readers of Black Hawk Down by Mark Bowden and Lone Survivor by Marcus Luttrell   "'It doesn't get ...
ABOUT THIS AUDIOBOOK
$22.50
ISBN: 9780147524713
Unabridged Download 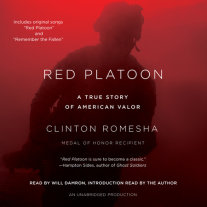