Gilbert King was awarded the 2013 Pulitzer Prize in Nonfiction for The Devil in the Grove: Thurgood Marshall, the Groveland Boys, and the Dawn of a New America, which was also a New York Times bestseller and a finalist for the Dayton Literary Peace Prize. A featured contributor to Smithsonian magazine and The Marshall Project, King also writes about justice for The New York Times and The Washington Post. He lives in New York City. 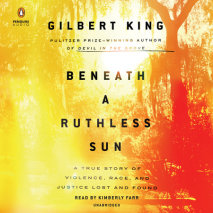 audio
Beneath a Ruthless Sun
Author: Gilbert King | Narrator: Kimberly Farr
Release Date: April 24, 2018
NAMED A BEST BOOK OF THE YEAR BY NPR and THE WASHINGTON POST"Compelling, insightful and important, Beneath a Ruthless Sun exposes the corruption of racial bigotry and animus that shadows a community, a state and a nation. A fascinating examination o...
ABOUT THIS AUDIOBOOK
$25
ISBN: 9780525528258
Unabridged Download 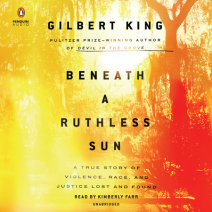