Robert Newton Peck comes from generations of Yankee farmers. Like the Vermont folk he writes about in his novel, A Part of the Sky, he was raised as a boy in the Shaker Way, which endured even after the sect itself had died out. Its view of life is embodied in the character of his young protagonist's father, who believed that a faith is more blessed when put to use than when put to word: "A man's worship counts for naught, unless his dog and cat are the better for it." Peck has written over fifty novels, six nonfiction works, numerous songs, and over one hundred poems. His most famous works are Soup and A Day No Pig Would Die. 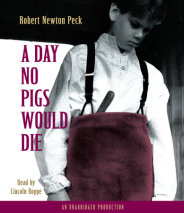 audio
A Day No Pigs Would Die
Author: Robert Newton Peck | Narrator: Lincoln Hoppe
Release Date: January 26, 2010
Originally published in hardcover in 1972, A Day No Pigs Would Die was one of the first young adult books, along with titles like The Outsiders and The Chocolate War. In it, author Robert Newton Peck weaves a story ofa Vermont boyhood that is part fi...
ABOUT THIS AUDIOBOOK
$14
ISBN: 9780307245861
Unabridged Download 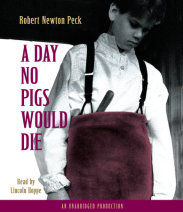