Nader Mousavizadeh is the chief executive officer of Oxford Analytica, a global analysis and advisory firm. Previously, Mousavizadeh served at the United Nations in the Office of the Secretary-General from 1997 to 2003 and was an investment banker at Goldman Sachs. A Rhodes Scholar and a graduate of Harvard College, he received his MBA from the Massachusetts Institute of Technology as a Sloan Fellow. He is a foreign affairs columnist for Reuters and the editor of The Black Book of Bosnia. 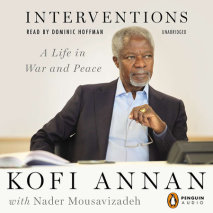 Interventions
Author: Kofi Annan and Nader Mousavizadeh | Narrator: Dominic Hoffman
Release Date: September 04, 2012
A candid memoir of global statecraft during one of the most consequential eras of recent historyINTERVENTIONS is the inside story of a world at the brink. After forty years of service in the United Nations, former Secretary-General Kofi Annan sh...
ABOUT THIS AUDIOBOOK
$17.50
ISBN: 9781101579497
Unabridged Download 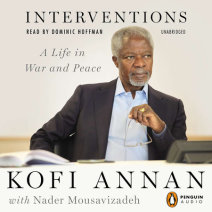