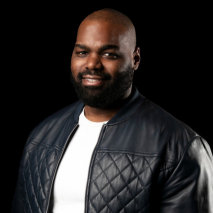 Michael Oher is an American football offensive tackle for the Carolina Panthers of the National Football League. He was drafted by the Baltimore Ravens in the first round of the 2009 NFL draft. He played college football at the University of Mississippi for the Ole Miss Rebels. He is best known as the subject of Michael Lewis’s 2006 book, The Blind Side: Evolution of a Game, and the even more popular 2009 film The Blind Side, in which Michael is portrayed by Quinton Aaron.

I Beat the Odds
Author: Michael Oher | Narrator: Michael Boatman
Release Date: February 08, 2011
The football star made famous in the hit film The Blind Side reflects on how far he has come from the circumstances of his youth. Michael Oher is the young man at the center of the true story depicted in The Blind Side movie (and book) that swept up...
ABOUT THIS AUDIOBOOK
$17.50
ISBN: 9781101484517
Unabridged Download