Robert W. Black is a retired US Army colonel who served in Vietnam and with the 8th Ranger Infantry Company (Airborne) in the Korean War. Parachute and glider qualified, twice the recipient of the combat Infantry Badge, he was awarded the Silver Star, three Bronze Stars—two for valor and one for meritorious service—the Legion of Merit, the Air Medal, and sixteen other awards and decorations. He was the founding president of the Airborne Ranger Association of the Korean War and was inducted into the Ranger Hall of Fame in 1995. He is the author of A Ranger Born, Rangers in Korea, and Rangers in World War II. 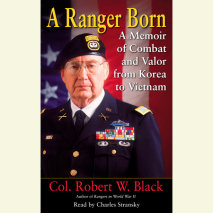 A Ranger Born
Author: Robert W. Black | Narrator: Charles Stransky
Release Date: July 30, 2002
Even as a boy growing up amid the green hills of rural Pennsylvania, Robert W. Black knew he was destined to become a Ranger. With their three-hundred-year history of peerless courage and independence of spirit, Rangers are a uniquely American brand ...
ABOUT THIS AUDIOBOOK
$6.95
ISBN: 9780553756241
Abridged Download 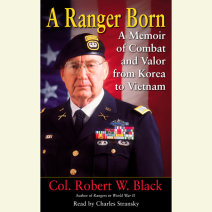