Syrie James, hailed as “the queen of nineteenth century re-imaginings” by Los Angeles Magazine, is the bestselling author of nine critically acclaimed novels including Jane Austen’s First Love, The Missing Manuscript of Jane Austen, The Lost Memoirs of Jane Austen, The Secret Diaries of Charlotte Brontë, Dracula My Love, Nocturne, Forbidden, Songbird, and Propositions. Her books have been translated into 18 languages, awarded the Audie, designated as Editor’s Picks by Library Journal, and named a Great Group Read by the Women’s National Book Association and Best Book of the Year by The Romance Reviews and Suspense Magazine. Syrie is a member of the WGA and lives in Los Angeles. 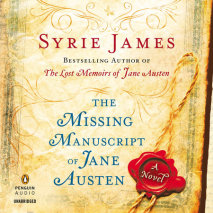 The Missing Manuscript of Jane Austen
Author: Syrie James | Narrator: Justine Eyre
Release Date: December 31, 2012
The minute I saw the letter, I knew it was hers. There was no mistaking it: the salutation, the tiny, precise handwriting, the date, the content itself, all confirmed its ancient status and authorship…Samantha McDonough cannot believe her eyes...
ABOUT THIS AUDIOBOOK
$17.50
ISBN: 9781101605165
Unabridged Download 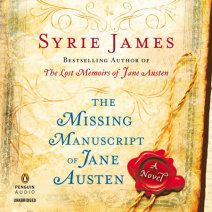