James Prosek is an artist and the author of eight books inspired by his interest in fishing. He published his first book, Trout: An Illustrated History (Knopf, 1996), while still an undergraduate at Yale University. In addition to writing articles for various publications such as The New York Times and Audubon magazine, Prosek has also been profiled in media outlets such as NPR's All Things Considered, Watercolor magazine, and The New York Observer. He's been fly-fishing with Tom Brokaw during a Nightly News segment and has sold Rolling Stone's Jann Wenner four different paintings that hang in the publisher's home in Idaho. His first solo art show in New York was at Gerald Peters Gallery in 1999 followed by other shows in Santa Fe, Philadelphia, and Paris, to name a few. 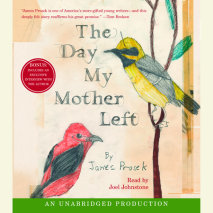 The Day My Mother Left
Author: James Prosek | Narrator: Joel Johnstone
Release Date: March 13, 2007
BONUS FEATURE: Exclusive interview with the author!When his mother leaves with the father of his worst enemy at school, nine-year-old Jeremy seeks to make sense of her abandonment. He throws himself into recreating the Book of Birds, a collection of ...
ABOUT THIS AUDIOBOOK
$15
ISBN: 9780739355589
Unabridged Download 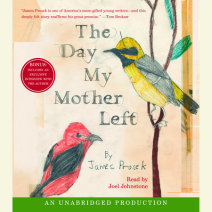