Sophia Rivka Rossi co-founded HelloGiggles, the popular internet haven for girls of all ages, along with writer Molly McAleer and her real-life bestie, New Girl star and She and Him songstress Zooey Deschanel. She has produced and written for several hit television series, including Fox’s Glee and MTV’s The Hills and The City. Born and raised in Los Angeles, Sophia's own personal and professional vision is focused on cultivating positive and safe online communities for young women, and she's particularly fond of blogs and artists that speak to tweens (and everyone's inner tween). Follow her on Twitter @sofifii! 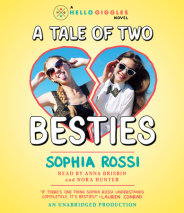 audio
A Tale of Two Besties
Author: Sophia Rossi | Narrator: Nora Hunter and Anna Brisbin
Release Date: May 12, 2015
Best friends. BFFs. Soul twinsies. Whatever you want to call them, Harper and Lily were born to be besties. With high school just around the corner, casual-cool Cali girl Harper and awkward, always-costumed Lily make sure to text each other every day...
ABOUT THIS AUDIOBOOK
$25
ISBN: 9781101915257
Unabridged Download 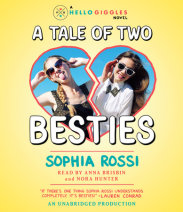