On July 20, 1969, Apollo 11 astronauts Buzz Aldrin and Neil Armstrong landed their lunar module on the Sea of Tranquillity and became the first humans to walk on the moon. Aldrin has since been awarded the Presidential Medal of Freedom and more than 50 other awards and medals from the United States and other countries. He holds a doctorate in astronautics from MIT. Since retiring from the US Air Force and NASA, Dr. Aldrin has remained at the forefront of efforts to ensure a continued leading role for America in manned space exploration. He founded a rocket design company, Starcraft Boosters, Inc., and the ShareSpace Foundation, a nonprofit organization devoted to opening the doors to space tourism for all people. 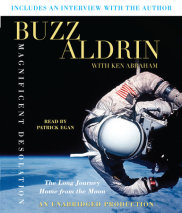 audio
Magnificent Desolation
Author: Ken Abraham and Buzz Aldrin | Narrator: Patrick Egan
Release Date: June 23, 2009
Forty years ago, Buzz Aldrin became the second human, minutes after Neil Armstrong, to set foot on a celestial body other than the Earth. The event remains one of mankind’s greatest achievements and was witnessed by the largest worldwide televi...
ABOUT THIS AUDIOBOOK
$18
ISBN: 9780307577474
Unabridged Download 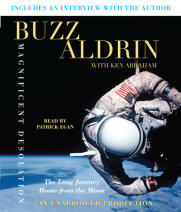