Becky Allen grew up in a tiny town outside Ithaca, New York, and graduated from Brandeis University with a major in American studies and a minor in journalism. For the last eight years, she has held various positions at TheBody.com, an online HIV resource. She is now the website director. Becky loves New York, brunch, and feminism. She cannot function without coffee. She lives in New York City with her sister, Rachel, and their cat, Lily. It was a conversation with her sister about irrigation that inspired Becky to wonder about a fantasy world where irrigation was fueled by magic, and what that would mean. Their discussion became Bound by Blood and Sand and its sequel, Freed by Flame and Storm. Visit her site beckyallenbooks.com and follow her on Twitter @allreb 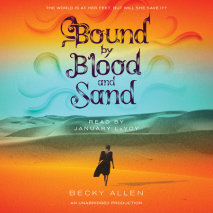 audio
Bound by Blood and Sand
Author: Becky Allen | Narrator: January LaVoy
Release Date: October 11, 2016
Jae is a slave in a dying desert world. Once verdant with water from a magical Well, the land is drying up, and no one remembers the magic needed to keep the water flowing. If a new source isn’t found soon, the people will perish. Jae does...
ABOUT THIS AUDIOBOOK
$25
ISBN: 9780147523488
Unabridged Download 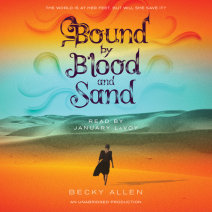