A. E. van Vogt was born in 1912 in Manitoba, Canada, and became a highly regarded and influential science fiction author in the 20th century. He launched his career with the publication of Slan in 1940. Before his death in 2000, he sketched the story to its sequel, Slan Hunter. 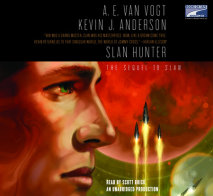 Slan Hunter
Author: Kevin Anderson and A.E. Van Vogt | Narrator: Scott Brick
Release Date: July 10, 2007
This startling SF adventure novel is a collaboration between the classic SF grand master A. E. van Vogt and contemporary master Kevin J. Anderson. At the time of his death in 2000, van Vogt left a partial draft and an outline for the sequel to his mo...
ABOUT THIS AUDIOBOOK
$20
ISBN: 9781415940334
Unabridged Download 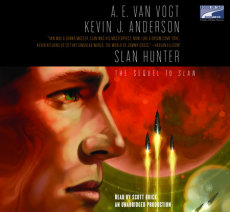