home
x
Subscribe
Lilian Jackson Braun
The history of Lilian Jackson Braun is perhaps as exciting and mysterious as her novels. Between 1966 and 1968, she published three novels to critical acclaim: The Cat Who Could Read Backwards, The Cat Who Ate Danish Modern, and The Cat Who Turned On and Off.  In 1966, the New York Times labeled Braun, “the new detective of the year.” Then, for reasons unknown, the rising mystery author disappeared from the publishing scene. It wasn’t until 1986 that Berkley Publishing Group reintroduced Braun to the public with the publication of an original paperback, The Cat Who Saw Red. Within two years, Berkley released four new novels in paperback and reprinted the three mysteries from the sixties. Since then, G.P. Putnam’s Sons has published seventeen additional novels in the Cat Who series. Braun passed away in 2011.
Read More +
3 results   page 1 of 1   view sort by

The Cat Who Had 60 Whiskers
Author: Lilian Jackson Braun | Narrator: George Guidall
Release Date: January 02, 2007
Polly Duncan is off to Paris, temporarily leaving Jim Qwilleran without his lady companion. Good thing there's lots to keep Jim busy. Like a mysterious death from a bee sting that leaves everyone but Koko the Siamese in a state of confusion. If only ...
ABOUT THIS AUDIOBOOK
$15
ISBN: 9781429586504
Unabridged Download 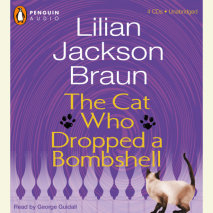 The Cat Who Dropped a Bombshell
Author: Lilian Jackson Braun | Narrator: George Guidall
Release Date: December 29, 2005
When a wealthy couple dies, Jim Qwilleran and his cats, Koko and Yum Yum, must follow the case to its explosive conclusion in this mystery in the bestselling Cat Who series.The town of Pickax is buzzing with excitement: its residents are about to cel...
ABOUT THIS AUDIOBOOK
$15
ISBN: 9780786555413
Unabridged Download 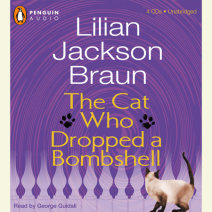 Cat Who Went Bananas
Author: Lilian Jackson Braun | Narrator: George Guidall
Release Date: December 29, 2004
The merry atmosphere in Pickax is dampened by the death of an out-of-town actor and the theft of a rare book. Qwill finds himself distracted from the events by his finicky pal Koko, who's been acting more fishy than feline. Has Koko gone bananas, or ...
ABOUT THIS AUDIOBOOK
$15
ISBN: 9780786555048
Unabridged Download