Jason Harris is the president and CEO of the award-winning creative agency Mekanism, with offices in New York, San Francisco, Chicago, and Seattle, creating provocative campaigns for such iconic brands as HBO, Ben & Jerry's, Amazon, Miller Coors, Peloton, and the United Nations. Harris was named #5 on the list of the top ten most influential social impact leaders. His methods have been studied at HBR, which published a case study on Mekanism in 2017. Among his influencers are bestselling authors Tim Ferriss, Aubrey Marcus, and Ryan Holiday. 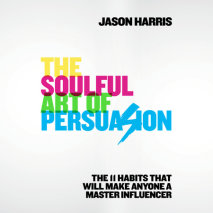 audio
The Soulful Art of Persuasion
Author: Jason Harris | Narrator: Jason Harris
Release Date: September 10, 2019
The Soulful Art of Persuasion is a revolutionary guide to becoming a master influencer in an age of distrust through the cultivation of character-building habits that are essential to both personal growth and sustained business success. This isn&rsqu...
ABOUT THIS AUDIOBOOK
$17.50
ISBN: 9780593150009
Unabridged Download 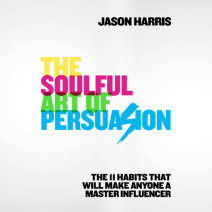