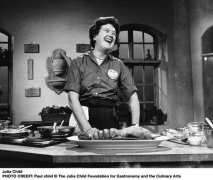 Julia Child was born in Pasadena, California. She graduated from Smith College and worked for the OSS during World War II; afterward she lived in Paris, studied at the Cordon Bleu, and taught cooking with Simone Beck and Louisette Bertholle, with whom she wrote the first volume of Mastering the Art of French Cooking (1961). In 1963, Boston’s WGBH launched The French Chef television series, which made Julia Child a national celebrity, earning her the Peabody Award in 1965 and an Emmy in 1966. Several public television shows and numerous cookbooks followed. She died in 2004. 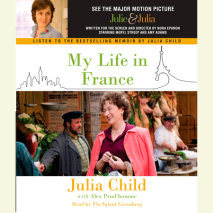 My Life in France
Author: Julia Child and Alex Prud'homme | Narrator: Flo Salant Greenberg
Release Date: April 04, 2006
In her own words, here is the captivating story of Julia Child’s years in France, where she fell in love with French food and found her “true calling.”From the moment the ship docked in Le Havre, en route to Paris, in the fall of 19...
ABOUT THIS AUDIOBOOK
$22.86
ISBN: 9781415934029
Abridged DownloadUnabridged Download 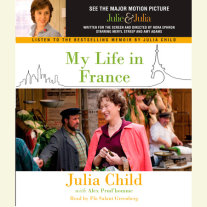