Johnnie M. Clark is a disabled veteran who lives with his wife and two children in St. Petersburg, Florida. After joining the Marine Corps at age seventeen, he served as a machine gunner with the famous 5th Marine Regiment in 1968 and was wounded three times. He was awarded the Silver Star for bravery. While recuperating in Okinawa, Mr. Clark studied karate as part of his rehabilitation program, and after his discharge, he taught martial arts at the University of South Florida. He is now a 6th Dan Master of tae kwan do and operates a tae kwan do school in St. Petersburg. Clark is also the author of Semper Fidelis, The Old Corps, No Better Way to Die, and the forthcoming Harlot's Cup. He is the recipient of the Brig. Gen. Robert L. Denig Memorial Distinguished Service Award for writing. 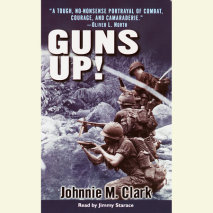 Guns Up!
Author: Johnnie Clark | Narrator: Jimmy Starace
Release Date: January 02, 2002
THIS GUT-WRENCHING FIRSTHAND ACCOUNT OF THE WAR IS A CLASSIC IN THE ANNALS OF VIETNAM LITERATURE."Guns up!" was the battle cry that sent machine gunners racing forward with their M60s to mow down the enemy, hoping that this wasn't the day ...
ABOUT THIS AUDIOBOOK
$5
ISBN: 9780553755633
Abridged Download 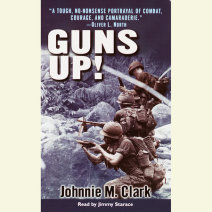