Roger Cohen is a columnist for the New York Times, where he has worked since 1990: as a correspondent in Paris and Berlin and as bureau chief in the Balkans, covering the Bosnian war (for which he received an Overseas Press Club prize). He was named a columnist in 2009. He became foreign editor on 9/11, overseeing Pulitzer Prize–winning coverage in the aftermath of the attack. His books include Soldiers and Slaves, Hearts Grown Brutal, and The Girl from Human Street. He lives in New York City. 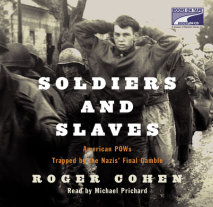 Soldiers and Slaves
Author: Roger Cohen | Narrator: Michael Prichard
Release Date: May 10, 2005
In February 1945, 350 American POWs captured earlier at the Battle of the Bulge or elsewhere in Europe were singled out by the Nazis because they were Jews or were thought to resemble Jews. They were transported in cattle cars to Berga, a concentrati...
ABOUT THIS AUDIOBOOK
$20
ISBN: 9781415925584
Abridged DownloadUnabridged Download 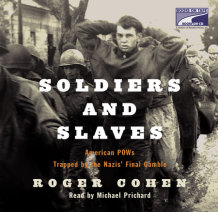