Dean Joy served as a combat infantryman with Patton's Third Army in France, Germany, and Austria during World War II. In 1950 he received an MS degree in aeronautical engineering at the University of Colorado, and began his aerospace industry career as a helicopter flight test engineer and aerodynamicist at Hiller Helicopters in Palo Alto, California. His forty years in the defense industry included employment as a helicopter operations consultant for the French Ministry of Defense in Paris and Algeria, and as a systems analysis manager and senior advisor at Lockheed Missiles and Space Company in Sunnyvale, California. He and his wife live in Los Gatos, California. 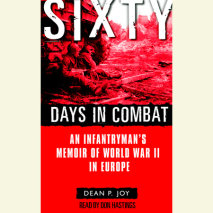 Sixty Days in Combat
Author: Dean Joy | Narrator: Don Hastings
Release Date: March 30, 2004
“The infantryman’s war is . . . without the slightest doubt the dirtiest, roughest job of them all.”He went in as a military history buff, a virgin, and a teetotaler. He came out with a war bride, a taste for German beer, and intima...
ABOUT THIS AUDIOBOOK
$6.95
ISBN: 9780739310496
Abridged Download 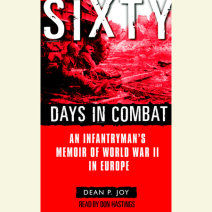